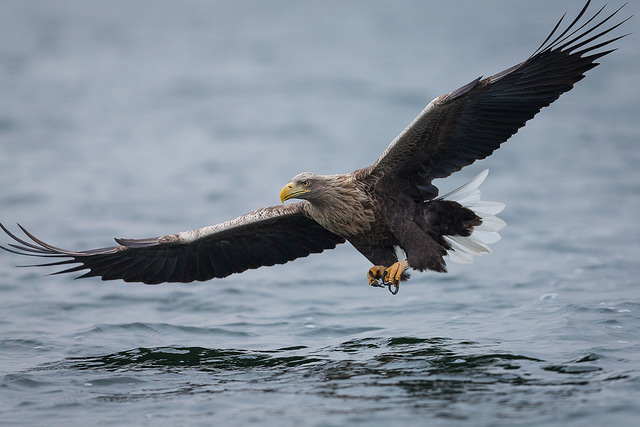 High school happens at an interesting point in our lives. I say this because we are all at different mental, emotional and physical stages, and share those four years differently. In ninth grade, you were the new kid on the block. And somewhere along those four years you matured and became a senior. You called the shots. But then you went to post-secondary right after and realized that being King Kong in high school was a short-lived experience. You’re back at the bottom of the totem pole.

Whether you moved out on campus or commute to school everyday, you’re in new territory. You’re literally on a new playing field. And it can be scary. It might make you anxious. It forces you to come out of your comfort zone to survive in a new element. So what can you do to shake off that sense of fear, anxiety and discomfort?

Well, let’s look at the one of my favourite stories, “The Eagle”:

A young photographer wanted to get a picture of an eagle. He’d heard about the bird before, and was eager to capture it in all its glory. He decided to climb up a tree to see it. When he did this, however, he didn’t see any eagles. So he decided to climb up a hill. But the hill was no good either because he still couldn’t see the eagle. As a last resort, he finally decided to climb up a mountain to get a glimpse of the creature. On his way up, he saw an eagle’s nest. He hung around in hopes that the eagle would make a return back to its nest.

While he waited, something quickly caught his eye. Fast wings. A keen eye. A strong chest. Finally, the eagle had arrived.

He whipped out his camera and shot as many pictures as he could. Then, all of a sudden, the eagle took a nose-dive for the bottom of the mountain. The photographer watched in amazement as the eagle swooped down hundreds of feet deep and caught something way down below.

Almost instantaneously, the eagle soared back high into the air, majestic as ever. The photographer was in complete awe. But then the photographer noticed something. The eagle was shaking in midair. Its body started to jerk and twitch. Without any warning, the eagle plummeted back to the earth. After a startling few moments, it hit the ground with a loud crash.

The photographer gasped. What on earth had gone wrong? Was the eagle hurt? Did someone shoot the eagle?

He didn’t hear a gunshot so what could it possibly have been?

He rushed down the mountain to see what happened. When he finally got to the bottom of the mountain, he found the eagle – dead.

Taking a nearby stick, he uncovered the eagle’s feathers. In the chest of the eagle was a dead weasel. A dead weasel inside of a dead eagle. Confused, he thought, “Clearly, the weasel must have killed the eagle, right?”

When the eagle went down to grab the weasel, it caught it in its beak. Within seconds, it flew back into the air, not giving much thought to its catch. What the eagle didn’t anticipate, however, was the weasel’s long claws and sharp teeth. The captive weasel did only what it knew best: it dug and buried itself deep into the eagle’s chest, ultimately bringing the bird down.

When it finally fell and hit the ground, the weasel died on impact.

Some of you now coming in to university might be holding on to things like fear, doubt, and insecurity. In the end, these things have the power to consume and destroy you, if you let them.

It’s really easy to let go of some things, but we choose not to. Slowly, these things kill us. Though you have might fears or insecurities, you must let them go. When we let these things dwell and manifest, they hinder us. They suppress us. They weigh us down and make it difficult for us to move forward. At Ahead of the Game, our program facilitators know all too well how easy it is to fall prey to things that can easily consume us.

Make the choice today to not allow these things to keep you from reaching your destiny and achieving the greatness inside of you. You were born to soar high.

Email us at info@aheadofthegame.ca for information on professional development, youth mentoring, and much more!